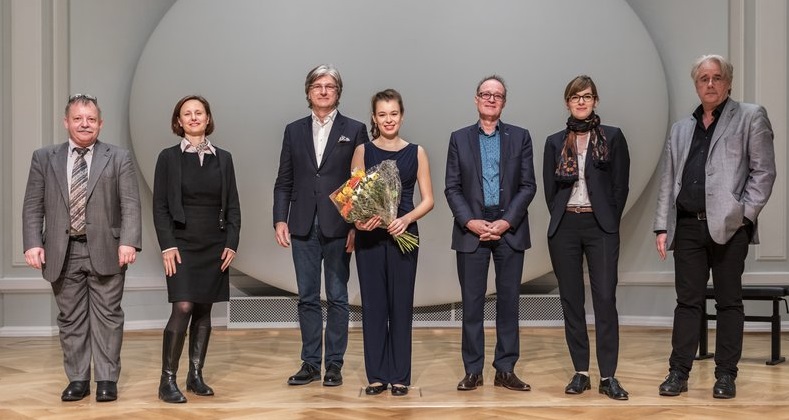 On 8th of December 2019 Marianna Bednarska has won the Prix Credit Suisse Jeunes Solistes for 2019. During the final round last Saturday, the Polish percussionist prevailed over three other solo competitors and one ensemble. Bednarska captivated the jury during the finale held at the Basel University of Music with a varied program featuring works by Iannis Xenakis, Michael Jarrell, and J. S. Bach.

The Prix Credit Suisse Jeunes Solistes carries a cash value of CHF 25,000 and is awarded every two years to a highly talented young musician. The award also includes the opportunity to perform at Lucerne Festival as part of the Debut series. Marianna Bednarska’s concert will take place on 22 August 2019 during the Summer Festival. Details of the program will be announced at a later date.

Bednarska (25) is currently studying at the Geneva University of Music. She has appeared as a soloist in the United States and Europe, playing with such orchestras as the Sinfonia Varsovia and the International Chamber Orchestra of Washington.

“The final round of the Prix Credit Suisse Jeunes Solistes sets very high standards, which is characteristic of this competition,” remarks Prof. Stephan Schmidt, President of the Jury and of the Conference of Swiss Universities of Music, as well as Director of the Basel University of Music / FHNW University of Music. “It is therefore all the more important for the jury to choose, from among all of the excellent participants, the winner who is truly captivating, who touches them in a unique way, and who thus demonstrates the greatest chance of being able to establish an international
career going forward.”

“Recent years have shown that the winners of the Prix Credit Suisse Jeunes Solistes have each moved on to a further important stage in their international careers through this award,” explains Michael Haefliger, Executive and Artistic Director of Lucerne Festival. “Marianna Bednarska has a promising future ahead of her as well, and I’m very much looking forward to her debut concert at our Summer Festival.”
“Young musicians are finding ideal conditions at Swiss universities of music, as can be seen, for example, in the final round of the Prix Credit Suisse Jeunes Solistes,” says Manuel Rybach, Managing Director of the Credit Suisse Foundation. “The high level of the finalists presents the jury
with a truly difficult task.”

Awarded since 2001, the Prix Credit Suisse Jeunes Solistes is a joint initiative of Lucerne Festival, the Conference of Swiss Universities of Music (KMHS), and the Credit Suisse Foundation.